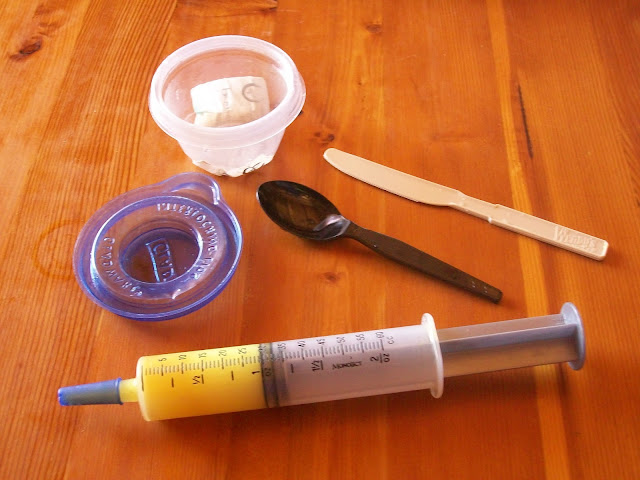 Those of you that know me personally, probably already know, it doesn't take a whole lot to amuse me. I have been blessed with curiosity, (thank you Daddy) and usually try to figure out a better way to do something......especially if it's something wasteful and/or messy.

The vet salve made with nitrofurazone and DMSO is messy.  If you scoop it up with a gauze pad, you usually get more than you want, "ie" wasteful and and more than you want usually ends up messy.  So I got the brilliant idea of putting it in a 60cc syringe with an end cap.

I'm so impressed with my "fix" I have to share it.  I can envision all sorts of salves than could probably be dispensed this way, as long as they are "runny".  There is one small problem.......getting the salve into the syringe.  This picture shows the 2 instruments I'm using.  The spoon is a tad too wide and the plastic knife is a tad too narrow, which is why I'm on a hunt for a tongue depresser.  Ellie in Florida said they have them at WalMart, 25 to a package.  Nice to know, but it would take me a LONG time to use that many, since I'm not a "use once and throw away" type of gal, goes back to that wasteful thing.  John has been to the doctor recently and I forgot to tell him to ask for one.  It was his primary care physician, which might actually have one.  Most of the specialists probably wouldn't unless it had something to do with their specialty.  His next appointment is with his gastrointerologist.  I know that isn't spelled right, but my spell checker isn't any help.....!!  Probably won't have one, but I'll send John with the request anyway.

I'm down to only doctoring Rosie and Quilla, still checking the others each morning, but so far they are doing great.....!!!

John is almost back to normal, except he doesn't like to kneel on that knee.  Yesterday he was working on my race car for next year.  One thing that has to happen is the key start has to be disabled, so we can start it with a button.  The wiring is inside the dashboard.  At his mature age he doesn't bend as well as he use to and in order to get underneath the dash, he had to take the steering wheel off and take the seat out.  Even then he said he got under there and almost couldn't get out.  It took a lot of squirming and using the roll cage to pull enough to get out.  I guess I'd have found him at feeding time, but by that time, he probably wouldn't have been very happy.   He did get the wiring out and the button installed, which is a good thing.  If he hadn't have accomplished his mission, he would have really been unhappy, I would imagine.....!!!  LOL
Posted by Tish at 10:39 AM

Maybe you could shave some off each side of the spoon to make it work or heat it a bit and form a deeper spoon but more narrow.