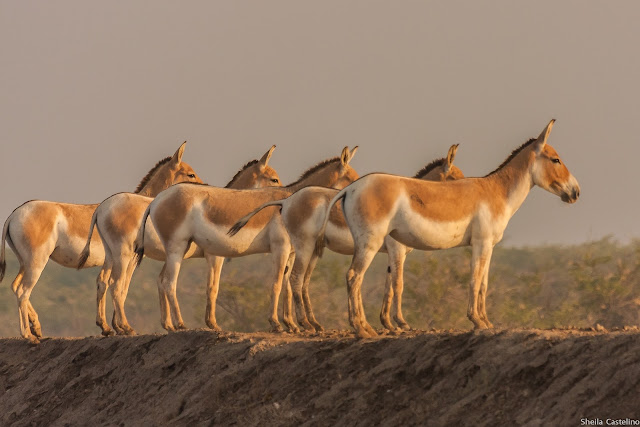 Not sure what these are, the info said India asses, they look like Kulans a type of Onager.  Onagers can not be tamed and are pretty dangerous to work with.  Peaceful Valley Donkey Rescue has 4 of them, they picked up as strays a few years ago.  Texas has canned hunt ranches, where people that don't want to waste a lot of time, can go and kill an animal of their choice.  The ones at PVDR probably escaped and of course the ranch wasn't going to go looking for them.  They have to be kept in special high pens because they can jump, anyone working with them have to be aware at all times of where they are.  Mark told me about one of the workers leaning on the fence on one side of their pen a few years ago, talking to someone.  This was a smaller pen only about 30 feet square and the Kulans were on the other side watching him.  He was talking, not paying attention and all of a sudden his arm had been bit and he had been kicked.  By the time he reacted, the Kulan was back with the others, watching him.  Mark said they never tame one little bit.  But they sure are a pretty animal.

Still not having to put on fly masks, which is a good thing.  At the rate they were tearing them up and losing them, where we couldn't find them, we wouldn't have enough masks to last if the weather stayed warm enough to keep the flies happy.  I'll wait until after the holidays to order masks for next year.  I order in the winter, when Colorful Equine probably isn't as busy.

We had a little bit of excitement around here yesterday.  John and Doug were out doing whatever it is guys do and I was on the computer, as usual.  Doug comes in yelling, couldn't tell what he was yelling about, but it seemed important.   I finally understood that John had fell off the ladder and was laying on the ground.  Memories of about 4 years ago, flashed thru my mind, when John fell off a ladder in the courtyard and compound fractured his arm.  Sure enough, got out to the feed room, where they had been trying to run an antenna thru the roof and ceiling, and he's moaning on the ground.  Said it was his leg, so I started poking and prodding, didn't get much reaction thank goodness.  Although he was a little touchy with the muscle and tendon behind the knee.  Then he complained about his ribs.  Poked them a little bit and not much reaction, so we decided to get him up and standing.  That went good, and except for complaining about not being able to take a deep breath, he was good to go, even did chores.

This morning he's still complaining about breathing, had to cough a couple of times and didn't enjoy that.  But the leg is OK except when he turns the ankle.  So I think he's going to be OK.  Now as to what happened.  For quite awhile after the earlier fall, he wouldn't get on a ladder, then he started getting on one and I guess had become a little too complacent.  Doug had been holding the ladder, but John told him to go in the feed room and see if the antenna was coming thru the hole.  While Doug was gone, John over reached the ability of the ladder to stand on uneven ground and down he went.  I think it's a guy thing.......LOL

Had some real nice people out today to visit with the donkeys and do some grooming. Now that it's cooling off, we're starting to have more visitors.  The donkeys really enjoy getting groomed, some of them like Frijolita will yell and scream until someone grooms on her and then when they go on to someone else, she starts yelling again.  I think she got groomed 3 or 4 times.

The onagers are really pretty but I don't think you could ever trust one. I hope John wil be ok, I am sure he will be blue and green for a while. I know what you mean by a man thing.I would see my husband do things only man would do when he worked outside.