JAKE IS OUT AND ABOUT

He went out like he had been doing it all his life, no drama, no silliness.  Pancho followed him around for awhile and Jake completely ignored him.  Saddik, the dog tried to get him to play and Jake wasn't interested.   This is Selena looking him over.  For some reason the camera angle makes her look larger than he is.  Not true.  He's not carrying as much weight, but is taller than any of the others. 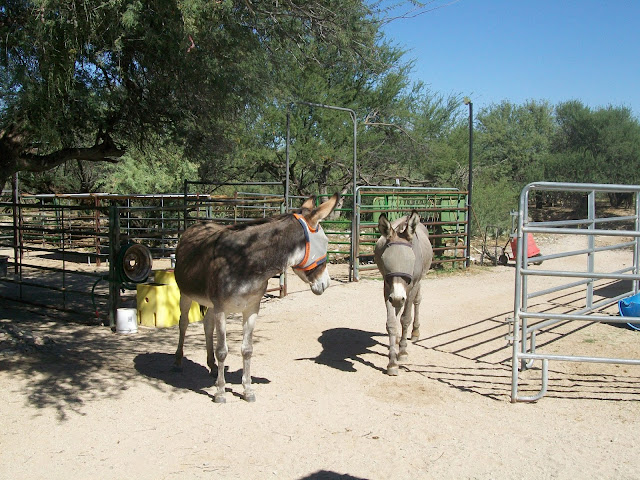 He's very mellow and is just out there doing his thing.  They didn't get to go over to Burroland today for 2 reasons.  Generally when we have a "newbie" out for the 1st time, we keep everyone on this side.  We never know how long it will take to get the idea across that it's time to go back into the pen to be fed.   Sometimes they watch what is happening with the others going in the pens and follow us in.  At other times, not so much.  The 1st day Tula was out years ago, it took John and I about 3 hours to round her up.  The next day over an hour and over the next couple of days she finally decided we weren't going to take no for an answer and decided to go along with the program.  He knows what animal crackers are and insists that they be part of the interaction between him and humans, so it shouldn't be a problem..............hopefully. 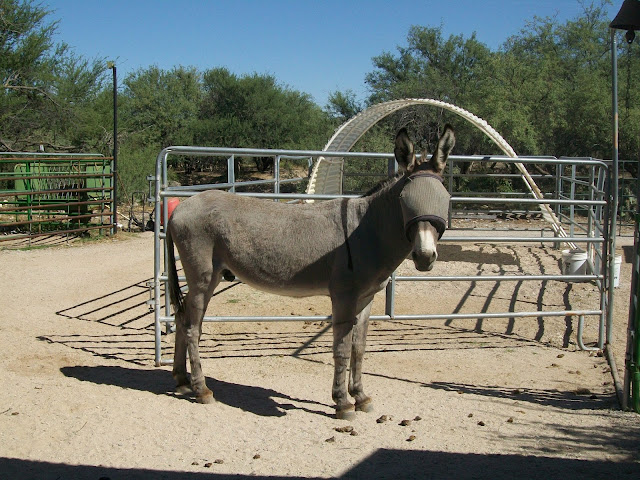 The other reason is we will be feeding early tonight.  Our grandson is going to be running a go cart on the dirt go cart track, so we're going to go out and see what's happening.  It's much easier to round up on 10 acres than 30 acres........!!!


We've decided to keep him here instead of Amy keeping him. She's pretty busy in too many directions to really be able to monitor him on a regular basis.  There's usually someone here or they'll be back in a little while.  I don't expect any crisis, but if there is one I'd rather he be here.  With equine you just never know what they will do to get themselves hurt.  Thank goodness donkeys are not as reactive as horses and have lots of common sense...........usually......!!!  LOL
Posted by Tish at 2:22 PM

He looks rather slim, were all the donkeys where you got him this slim? Glad he fit in or was smart enough to know he was out numbered.

I wish all of mine were that slim. LOL That's what a pretty donkey looks like. There is nothing prettier than a donkey in the wild, slim and trim. Domestication isn't always good for donkeys, unfortunately. Most of the ones we get in with weight problems is, they've been fed too much.

I think that is my problem, I am feeding myself too much and the wrong stuff.