BlackJack is getting ready for the Christmas Fair! 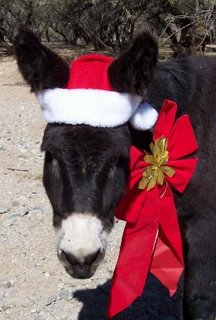 We're all busy getting ready for the Cascabel Christmas Fair next week-end. We have no idea how many folks will come to visit with the donkeys, but it should be a lot of fun. I wonder if 2 days of petting & hand fed timothy pellets by lots of people will make Monday seem like a bad dream to the gang........!!!!!! Probably!

Shiloh won "Picture of the Day" at www.equusite.com this week. You can send an equine picture, & they have 4 pictures every day to be voted on by anyone that wants to vote. There is a woman on the internet, that always tells the donkey & mule people when there is a "longear" that needs a vote. So between her putting out the word & everyone I e-mailed to vote for him, HE WON! We don't win anything except bragging rights, but it's still a lot of fun.

The 2 girls that were chased by the neighbor's dogs are doing good. Nina had cuts & scrapes that are healing just fine. Belle is still on "corral" rest. I assume she is feeling better, although she is still limping. She seems to think I've lost my mind, because I won't let her out of the corral. Today we are letting her have access to another pen, so she has about twice as much room, but she still wants out with the rest of the herd.

Animal control is coming out this week to confiscate some of the dogs. The owner has agreed to give some of them to the county. Notice I said "some", not all. None of them are spayed or neutered, so we will probably have the problem again in a few months as more puppies are born. I'm sure they will be euthanized, because of lack of socialization. Another man made problem, where the animals pay the price............!!!!
Posted by Tish at 12:44 PM