JACKSON AND LA'ROY STRUTTING THEIR STUFF.....!!

Linda took this video yesterday.  We had a couple of new volunteers out and when they got thru working, they got to  play with the donkeys.  Linda couldn't have picked a better song to go with the boys run.  Siggy and Harley were running in front of them and they did really good too.  Siggy and Harley I don't think had even been out before.  Siggy is a micro mini only 28 inches tall, so his little short legs go pretty fast, but he was in the lead and seemed to be having a great time.

New Year's Day there is going to be a New Ears Bray 5K run at the Triangle T Guest Ranch in the Dragoon mountains put on by Burro Buddies.  Should be a lot of fun, for people and burros, not to mention fun to watch.  I wouldn't be surprised if some of the minis will be running.  A lot of people that have never ran with a burro before like to start out "small".  I would imagine they think the smaller the easier to control, which usually isn't the case.  A lot of these little guys have Napoleon complexes and don't know they are little.

I have to brag a little on all the donkeys and even Casper the little white devil mule.  The last few days everyone have been really good at roundup time.  We usually find a donkey, they follow us to their pen and get a treat.  What this process does is  teach them to not go in their pen until they see a person with the payoff in hand unfortunately.

The last few days many of them have actually been going into their pen on their own and waiting patiently for one of us to show up with the reward.  Tonight the Burro Barracks herd of 14 all went in on their own.  Usually we have one or two interlopers in there that don't actually belong and getting them out without losing some of the ones that do belong can be a challenge.  In fact that's how Oliver ended up in the barracks, he decided that's where he belonged and refused to go back to the pen with his 2 mini friends he had been with for years.  Over the years things like this have happened quite often.  A pair will come in and the people say they are bonded.  They get here with so many other donkeys and acres to explore and one will go one way and the other one goes his own way.

As for Casper the little mini mule, he's been going in his pen like a good boy.  But Linda said yesterday he ruined his good record. 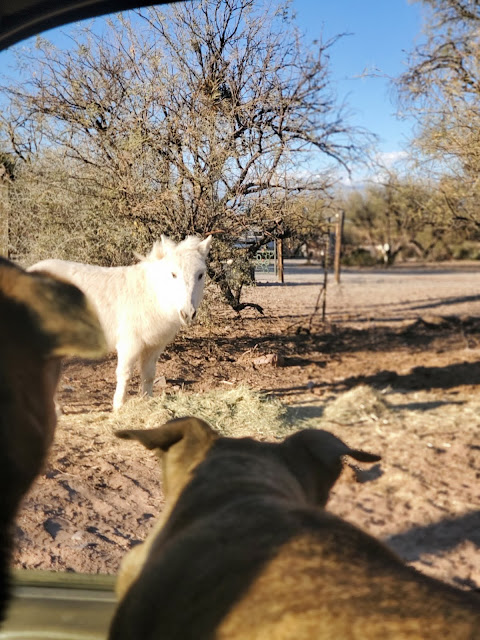 Linda and the dogs are on the dirt road coming to our driveway.  Casper is eating hay that Lynn and John deem not good enough for the donkeys, they put out for the range cattle.  In other words the hay is outside our perimeter fence, which means Casper is also outside the perimeter fence.  Linda said the dogs looked like they were saying "you're in trouble, you're in trouble".  He's not as smart as he thinks he is, if you yell at him to get back where he belongs, he goes back in where he got out, so we know where to fix it so he can't use it again.  We all thought he was being a good boy, we see him off and on during the day and he's always here at feeding time.  The little devil has a built in clock I guess.....!!  LOL