Well that isn't exactly true, it got down to 52 degrees last night, made us scramble for the comforter down at the foot of the bed.  Unfortunately one of the cats was laying on it.  Nothing is more whiny than a comfortable sleeping cat.   The days are still pretty warm but usually not going over 100* which is a good thing.

Saturday night we went racing on the dirt.  Well, that was the plan, but we didn't expect the track to not be prepared.  I guess they didn't know how many hornets would show up, so they didn't bother to wet down and prep the track.

They actually had 6 cars show up, which is enough to make a race.  I started in the back and this gives an idea of what it was like on the track.  This is the car that won, the rest of us were back there in the dust.  The dust from the last lap is still hanging in the air in front of him.

Could not see the track, spent almost as much time off it as on it.......LOL  See that pile of tractor tires around the light pole?  I "visited" them twice, last time took out my power steering, it was so rough and dusty, I didn't even realize it......!!!

I have waited 5 years for the dirt track to reopen, so needless to say it was disappointing.  Hopefully they will figure it out and have the track prepped next time. 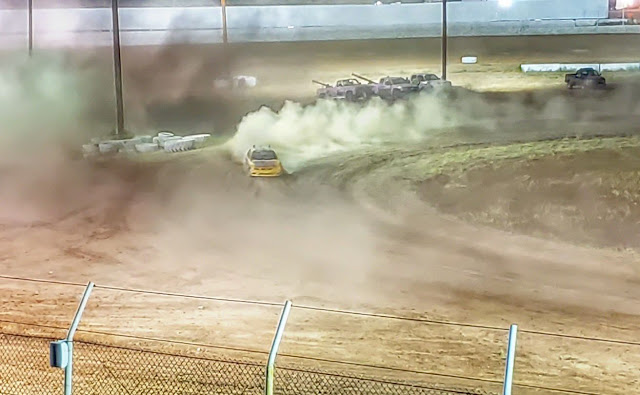 Our son was racing his modified at the pavement track and their race was the last one for the night, so we hurried over there, sneaked in and caught the last 10 laps of his race.  He finished 8th and the car is in good shape, so no complaints.  The security people are so use to seeing us roaming around they just waved us in.  I doubt if they would have been required to charge us for about 4 minutes of racing, but they could have at least acknowledged we weren't suppose to be there.......LOL

This morning when we got up the Night Blooming Cereus had bloomed.  They are such a beautiful bloom, but only last a few hours.  Don't know if the moths pollinated them last night or not.  If they did, later on this summer they will get a bright red bulb on them with lots of seeds.  Years ago I called the Desert Museum to ask how to grow them.  They told me, but I didn't get any of the seeds to germinate.

This Friday we are going to take Bella to the Equine Clinic up by Phoenix to hopefully see what is wrong with her hindquarters.  We have had her adjusted twice, but this is a long term problem she's probably had for a long time.  She can't get up when she lays on the ground without sitting up on her hindquarters like a dog.  Her hocks are both callused and subject to opening up, so I'd like to find out exactly what is wrong with her if possible.  She such a sweet little girl today Suzanne, Jorja and John were working on some fencing and Bella decided they needed her help and was determined to do her part whether they appreciated her efforts or not.  They didn't.........LOL

Big Gus has been acting a little off the last couple of days.  He's got a heart murmur he was probably born with, but I always worry if he isn't in my face constantly.  Also it's been so hot and he has so much hair, we thought that might be bothering him.  I could body clip him but then he wouldn't look like a Poitou and I'm not sure that's the problem.  Suzanne said he was a little touchy about his touching his cheek, so maybe he has some teeth problems.

It's so difficult sometimes to figure out what is bothering these guys.  Donkeys are so stoic they can really be sick and you would never know it. We'll watch him for a couple of days.  He's eating, but he's not in your face, which is typical Big Gus.
Posted by Tish at 6:53 PM