Arizona weather right now is rather icky in a lot of areas.  Trudy and Chancer are coming from 7000 feet elevation up north, so instead of Tuesday, they might make it tomorrow.  I haven't heard from Christine today.  Their pen is ready and waiting for when they do make it.

They are already "penciled" in for the Tucson Rodeo parade February 21st.  When I filled out the paperwork I said we'd bring 12 donkeys.  At the time I thought that was probably more than we'd actually bring, last year we only had six.  Linda has 17 on her list with handlers and if Georgette and Dave bring Jacque and Sugar that will be 19.........  I just hope someone isn't there to count us........!!  LOL

The new kids have a couple of weeks to adjust to new surroundings and do some parade training and that should be enough.  Christine said Chancer needs a job, so might as well get him started.

The donkeys have been getting a lot of grooming this week.  Suzanne and Linda have been coming out from Benson every morning and brushing the donkeys.  Suzanne is a full time RVer and is thinking about bringing her RV out here and staying awhile.  They both really enjoy being with the donkeys and of course the donkeys really enjoy the attention, so it's a win win situation for all involved.

This is Loki and Rambo play fighting.  Geldings can play pretty rough sometimes and a lot of people that aren't familiar with donkeys get upset.  They aren't nearly as rough as the jacks in the wild are, but it can look pretty bad.  I know I've tried to sneak up on a couple of them play fighting to take pictures and if they see me they stop, and look at me like, "why are you staring at us and ruining our fun"..............!!

The jack was suppose to be picked up by Peaceful Valley Donkey Rescue yesterday, but I haven't heard anything yet.  If I don't hear anything by tomorrow I'll get in touch with them and see if they can update me on how he's doing.  Although he was never ours, I'm still interested in his well being and hope he can have a good life. 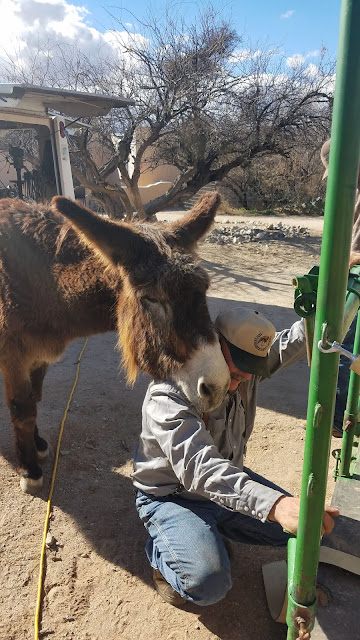 This is what Tyler has to contend with, when he's working on Gus.  This is Big Gus "helping" he helps with any and everything anyone tries to do outside, doesn't matter if he knows them or not.  Tyler has done his feet a few times, but I wouldn't say they are buddies.

Tyler came this week to reset Gus' shoes.  Gus hadn't been comfortable since the last reset, so Dr. Jeremy came out too.  They took some x-rays and decided on a plan to change the slope of his feet.  They also discovered some calcium deposits it looked like about 9-10 little white spots in the x-ray in a line below the coronet.  There were no other white spots except for one little spot about an inch or a little more below the line of spots.  I guess it was up with the other spots and broke away and is headed down to the bottom of his foot.  That is probably one of the reasons he hasn't been comfortable.

They did all their magic and he's been much more comfortable.  But this morning when Linda and Suzanne were grooming on him he was biting at them like he does when he's sore or doesn't want to be messed with.  They were grooming on his shoulders, so I wonder if changing the slope is making his shoulders sore?  Of course the weather the last couple of days has been bad rain, cold, wind, I'm sure that isn't helping.

Linda just came in and said Rambo is in "time out".  He's been doing good on his MMX supplement from Horse Tech.  In fact we had only been giving him half of what he should be getting because it seemed to make him sleepy.  I don't know if the wind this afternoon has him fired up but he was being rude to some of the other donkeys.  So I guess we'll up the amount of MMX he's getting and see if he can behave himself.  I've got some other herbs I can try also if this quits working.
Posted by Tish at 2:50 PM