WE MAY BE HEARING THE PATTER OF LITTLE FEET SOON 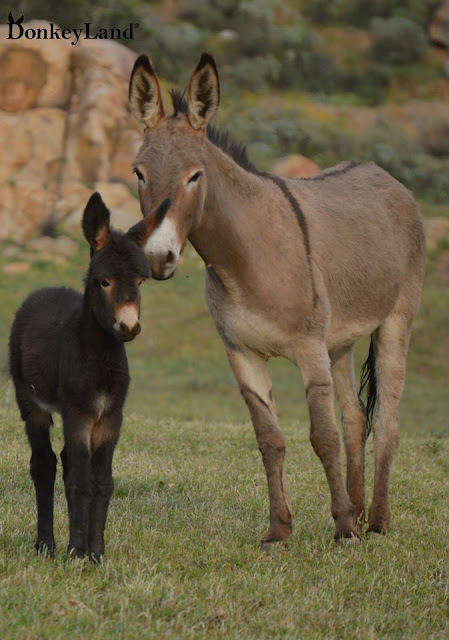 Just got a call from a man named Dave, that was camping in the Alamo Lake State park, about 90 miles west of Phoenix, with his family.  About half an hour before he called, they found a baby burro tangled in some barbed wire with no other burros around.  They got him to drink some water and were trying to get him to drink some cow's milk from a bowl with little success.  I guess he didn't have any wounds, just hadn't been able to get out of the wire.

I talked to him for awhile and it sounds like the little guy, is a guy, is probably less than a week old, only 2 upper teeth and a scab on his belly button.

Dave managed to get him to drink the milk out of a bowl, while we were talking, by sticking his fingers in the milk and playing with the little guy's mouth.  But it's cow's milk, which will give him diarrhea long term, and shouldn't be used as a replacement for equine.  He needs Foal-lac or some milk replacement made for baby equine.  Dave said he was headed home to Phoenix and was taking the baby with him.  He also said he was going to call a feed store close to where he lives to see if they would be open when he got there, or deliver the Foal-lac to his home if they closed.  I love a person that gets involved by jumping in with both feet, without hesitation .......!!!

I told him to call me tomorrow and we'd figure out a plan.  I think that means that we as a rescue will probably be taking the little guy in.  That should certainly liven up this "retirement" home.......!!  Well he will have plenty of "aunts and uncles" here to irritate.  We haven't had a little one since Wister and that's been about 5 years ago.

Baby will have the best possible home learning to be a burro with all you oldsters - how fun for you!

Haven't heard anything yet today, I do think we would probably be the best avenue for the little guy. Besides baby donkeys are so cute........LOL