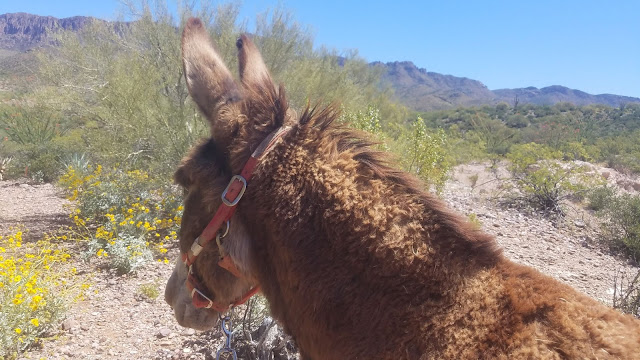 Tomorrow Lynn, Linda, John and I are taking off again and leaving Suzanne in charge.  She enjoys the donkeys and says she doesn't mind.  It wouldn't take all 4 of us to deliver one donkey to Scottsdale, but we're all nosy and don't want to miss anything.

We will get up early and at least help with chores before we take off.  Rambo is going to a new home in Colorado and has to be delivered to Monique's place to catch his ride.  I think Dave is already in town and won't be headed back to Colorado until Saturday morning.  Dave is picking up his new donkey at Monique's and has agreed to pick up Rambo to deliver to his new home.

Rambo will be learning to pack burro race and also will be used during hunting season for hauling supplies and hauling out elk if necessary.  I am sure he will enjoy all the new experiences, nothing fazes him as long as it's interesting, so we are expecting good reports from his new family.

Saturday is going to be a race day...........but..........with a twist.  The dirt track is still trying to have races for the Hornets.  They had their 1st race last week-end, but we were in Superior with the pack burro racing clinic.  They are racing again this week-end, but so is the asphalt track, where I have been racing for the last 4 years.  They had 7 cars last week-end on the dirt, but 2 of those cars are in 2nd and 3rd over at the asphalt track, so chances are they won't take a chance on losing too many points for end of the year.

Me..........I've had such a lousy start this year, I'm not in a position to worry about points, besides I love the dirt, so I'm going to jump from the asphalt to the dirt for this week-end.  You would think the tracks would make the effort to not stomp all over each others programs, but I guess not........!!  We saw a video taken by one of the driver's last week and there was so many rocks flying around, John is talking about putting another layer of wire across my windshield to help keep them from coming inside the car maybe they should require mud flaps on the race cars......  LOL.  I hope enough cars show up to make it interesting.  The dirt track won't race again until in July, which should give people a chance to build a car if they want to.

Although it hasn't been really hot yet, the flies have arrived in force.  The fly traps are doing a great job, although there's still enough flies out there to make fly masks necessary.  And I've already had to put zinc oxide on Penny's bare front legs.  I don't think her legs had ever been doctored to keep the flies away before she came here about 7 years ago.  Over the years of getting bitten and bloody every summer, the hair follicles finally said, "that's it........I'm not even going to try to grow hair".  I was going to put socks on her legs today, but I put zinc oxide on her legs yesterday.  Zinc oxide and socks do not mix well, so I'll have to wait until the zinc oxide wears off before putting on socks. 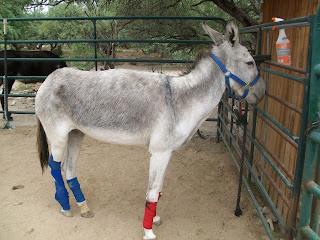 Here she is a couple of years ago in polo wraps.  They work really well at keeping the flies off her legs and they stay up better than crew socks.  I like the socks because when it gets over 100 degrees The socks allow for more air flow and I would like to think keep her legs cooler than the polo wraps. But the socks need to be pulled up a lot more often.

Lynn and Linda are going to be heading north about the middle of May.  We sure are going to miss them, I'm sure the donkeys will too, L&L spend a lot of time messing with the donkeys.  So does Suzanne, so at least this summer they will still have someone to play with them.