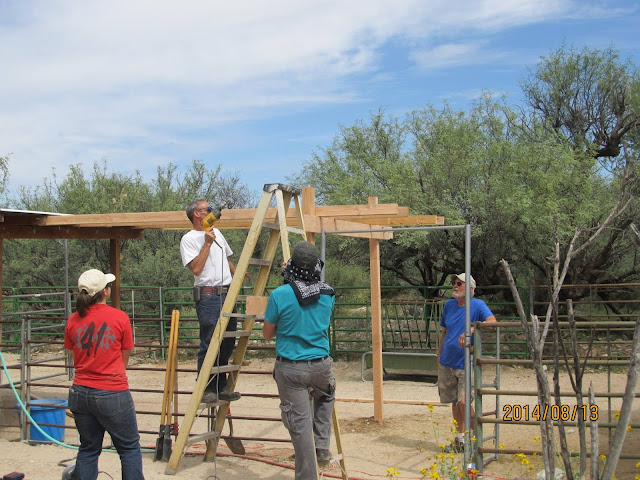 This is Jenny, Mike and Tony, working, looks like John is "supervising".....!!  LOL  They came out again this morning and went right to work, adding on to an existing shelter, so Falena and Selena's bunk (in the background) will be out of the weather.  We've got some other pens that need shelters too.  If they keep coming out maybe we can get some more built.  John keeps saying 2 of the pens are just temporary, but they've been in use for years and the temporary shelters aren't very effective. 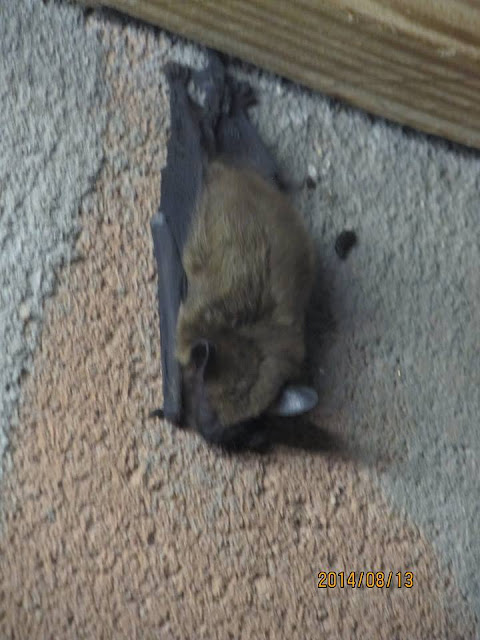 Last night we went to the races to watch Rod, our son race his new modified.  It isn't actually new, but it's new to him.  He finished his races and stayed out of trouble.  It's got a lot more motor than his old car had, and it's got some type of fancy clutch he has to get use to.  But not bad for his first night out.

When Doug went out to let the donkeys out of their pens, he saw this little guy on the wall of the feed room porch.  We usually just have the Mexican Freetail Bats here, the same ones that are in Kartchner Caverns.  They are tiny little things, weighing less than a quarter.  But this time of year we get the migrating nectar bats that are quite a bit larger.  We know when they are migrating, they hit up the hummingbird feeders.  We see them in the back yard, hitting the feeders to make the juice fall out and they catch the drops before they hit the ground.  It's really interesting to watch.  Unfortunately our windows are close to the battle and by the time they move on, you can't hardly see out of them, for all the sugar water juice.  I'm a real big fan of bats, amazing animals.  The Freetails can eat their weight in mosquitoes every night.  Since this has been such a wet monsoon this year, we are having a problem with mosquitoes, which is unusual, so the welcome met is out here for all bats that would like to visit. 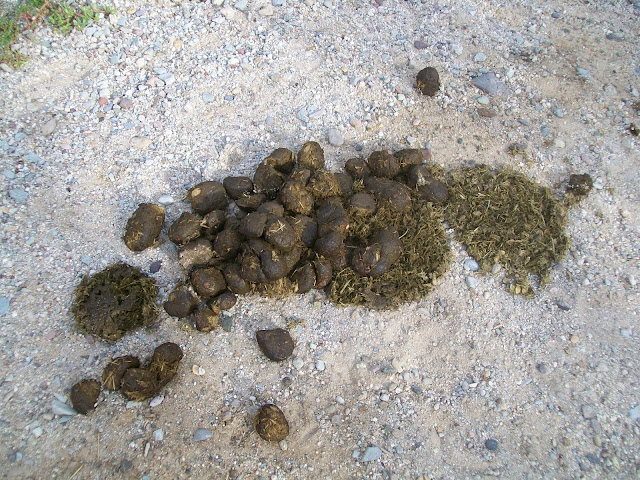 This is some of the work of the Gazelle Dung Beetle, Tony told us about the last time they were out to volunteer.  The shredded poo is where they have been working overnight.  They can break down a huge pile of poo, by sun-up and do on a regular basis.  The road apples are from someone that came along later and added to the pile.  When you disturb a pile, you never see more than a dozen of the little devils.  I don't know if a few can do that much work or if the others are already underground, or wherever they go when they get thru with their night's work.  Very interesting little critters.
Posted by Tish at 3:15 PM