I should have had the camera handy this morning. We had 2 women come out to visit with the donkeys. Yesterday they had been peeling apples to dehydrate & brought the peelings & cores for the donkeys. Of course everyone was thrilled except for BlackJack & Lucy, who both treat apples like a horrible acid we are trying to ram down their throat. BlackJack was raised with a little boy, & much prefers junk food, french fries are a particular favorite. He's not really into healthy snacking. Lucy just gives you a sad look if you try to feed her apple.

When we got to Tula I told them that she doesn't like people & wouldn't take anything from them. Not only did she take an apple core she came back & took another one. That is the 3rd time in about 6 years she has taken treats from someone other than us. It's always been a woman, although I think she really prefers John over me. Maybe we should use apples with her. She really seemed to enjoy them.

We got in about 2am from the races last night & it was 31 degrees, so I went out to put Sha'ba & Pepper's blankets on them. Although it wasn't real cold, they both stood very still for me to put the blanket on, so I am sure they appreciate the blankets. Pepper is even resigned to staying the pens at night, & doesn't try to crash the gate to get out.

When Courtney was here last time she left a soaking boot for me to use on Jenny & Quilla. Mine is a huge thing, takes about 1/2 a gallon of liquid to cover Jenny's foot. This one is smaller & made of very "firm" material. I tried to put it on Jenny this morning, & for once in her life she was actually cooperative. BUT, Courtney is going to have to show me hands on how to get it on her foot, I didn't even come close. I think I can wrap her foot in a disposable diaper & it will soak up water, so I won't have to pour so much into my boot.

Tomorrow is suppose to be worming day. I never definitely plan anything around here, because if I do something else comes up. I'm looking for a microscope, so in the future I can do fecal samples & maybe not have to worm as much. Worm immunity to wormers is becoming a big problem, & in the southwest we usually don't have as much problems with worms as other parts of the country, that have pasture. So if I can test & not have to worm as much, that would be a good thing.

I tried to talk Paladin into letting me put his fly mask on this morning, without having to use the chute. He actually was interested, smelled the mask, let me get right up to putting it over his ears, & decided he didn't want to participate. That's OK, he did take apple from the women, so he's doing OK. 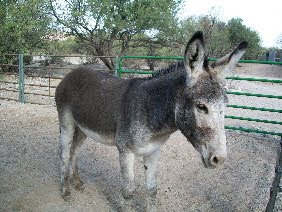