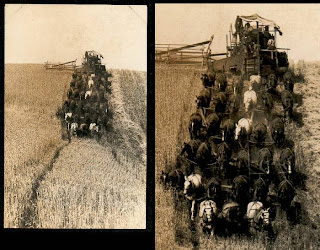 Actually things have slowed down a little bit as far as Jenny & the boys are concerned. Everyone is busy feeding themselves on anything that looks edible. I would imagine this time of year their bodies tell them to store up whatever they can. Years ago someone was telling us we need to make sure we have no brush under the mesquites, because if there was a fire it could get out of control. Believe me, our ground is cleared of anything that they can eat. Fire danger is a real low priority around here.

John just came in & said Paladin had Frijolita down in the pens was on top of her & biting her neck. John had got him out of the pen, & closed Frijolita & Daisy in the pen. I went out & Frijolita was really scared & standing with one hind leg off the ground. She has stringhalt & seems to get lame easily even without being mauled by another donkey. Since it was in the pens I thought it might have started over leftover hay. But while we were in the pen, we heard commotion down below the house. He was running Tula, with Quilla, Jenny, & Chester trailing. Around & around they went with Chester occasionally getting close enough to Paladin to give him a quick bite. Tula kicked him in the chest 3 or 4 times hard enough to slow him up, but he came right back. Tula came around the big mesquite tree by the courtyard, she ducked, he didn't. It set him back on his haunches long enough for her to get away & he followed Jenny into a pen.

This is a new one on me, usually the males aren't so aggressive with the jennies. Right now he is in the pens, with a bloody nose, bloody mouth & 2 banged up eyes. I'll have to ask around & see if anyone else has seen this problem. I still don't know if it was hormonal or aggression, he's been so mellow, I would tend to think it's hormonal, but why so aggressive? Certainly not much of a gentleman.
Posted by Tish at 10:46 AM